A Long Weekend in Chicago via Amtrak

One day my husband brought up at the dinner table that there was going to be a Maker Faire event in Chicago in April 2017. We’d been to Mini Maker Faire events in Minnesota and really enjoyed them.

The discussion went from a hair-brained idea to having hotel and event tickets booked within three hours. Normally we’re more contemplative than that, but apparently we were wanting to prove to someone (ourselves?) that we could be spontaneous once in awhile. We’d been discussing wanting to take Amtrak to Chicago sometime, as we’d never taken Amtrak before and didn’t really want to deal with a car in Chicago, so we booked four tickets on Amtrak while we were being spontaneous.

A couple weeks later we were notified that the Maker Faire event in Chicago was postponed. There we were with hotel reservations and train tickets, but no event to attend. We decided to go to the Windy City anyway.

This was a very, very quick trip. We rode the train from Union Depot in St. Paul starting first thing Friday morning, and we arrived in Chicago early Friday evening. Then we left Chicago Sunday mid-afternoon, and arrived home very late on Sunday evening. That gave us about 43 hours on the ground in Chicago, and about 16 hours of that was going to be spent sleeping.

Our family has ridden on trains around Europe, subways in New York, the light rail lines in Minneapolis, and some touristy train rides in the western US, but this was our first time on Amtrak. I love trains. Even crappy ones that are dirty and full of graffiti like you find in parts of Europe. I just like the freedom they provide en route to your destination.

We got around mostly via taxi. Going into the trip we wondered how easy it would be to get a taxi in Chicago. The answer: very, very easy. Pretty much all we had to do was step toward a curb, look  a little confused, and a taxi was pulled right over. Taxis were also very affordable compared to what we are used to in the Twin Cities. There didn’t seem to be any need for us to use Uber or Lyft when taxis were so readily available.

We also walked, a lot.

Our hotel for our two nights in Chicago was the Sheraton Grand, on the Chicago River, close to Michigan Avenue and less than a mile’s walk from Navy Pier. We had selected that hotel originally because it was one of the official hotels for the Maker Faire event. We ended up keeping the reservation because of its proximity to the major Chicago sights. My one knock on the hotel was that the refrigerator in the room was 100% designated for use as a mini-bar. There wasn’t an inch of space for a water bottle or anything. Many much less expensive hotels have fridges as a standard room amenity now. Given that the hotel room wasn’t exactly a bargain, it would have been nice to at least have a fridge. I can’t remember whether the wi-fi was free or not.

We packed a lot of sights into our 43 hours of time in the Windy City. And we had a great time. What follows is a summary of our adventures. 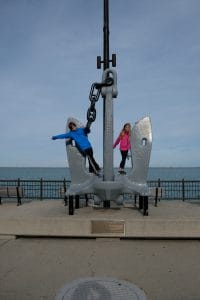 Our first order of business the evening we arrived was to walk over to Navy Pier. Because it was the end of April, it was a little chilly, so it was pretty quiet crowd-wise.  The best views of the Chicago skyline are from the pier! 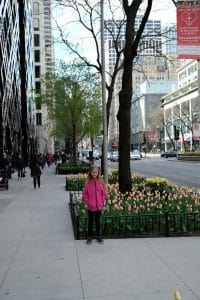 Michigan Avenue is a treasure. Truly. There was beautiful architecture and the spring flowers were in full bloom. Even if you are not enamored with cities, it’s hard not to be charmed by the aesthetics of Michigan Ave. We are not really shoppers, so I can’t speak to that experience as much (other than the kids loved Dylan’s Candy Bar). My husband took a picture of Michael Jordan’s Steak House. He was a huge fan of MJ growing up, but not enough of a fan to fork over hundreds of dollars to feed our family of four steak lovers at his restaurant. 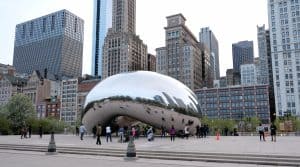 I don’t think Millenium Park was a thing the last time I had visited Chicago in the late 1990’s. It’s really lovely and well done. Again, with the spring flowers in full bloom it was just beautiful in the park. “The Bean,” the mirrored sculpture, was a brave piece of art. I say brave in that, if anyone had floated the idea of a giant mirrored bean sculpture to me, I’d have said they were crazy. But it is almost magnetic how it draws people to it. Iconic. 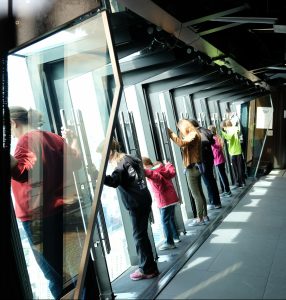 360 Chicago Observation Deck was at the top of the John Hancock tower. Unlike Willis Tower (formerly the Sears Tower), you get spectacular views of Lake Michigan. The kids and I did the thing in the picture where you tilt out the side of the building. They play some suspenseful music to enhance the experience, but honestly, none of us found it really scary. 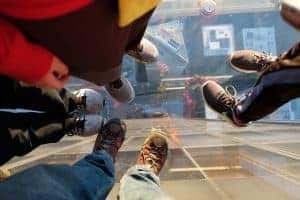 So the big attraction in the Willis Tower is the Skydeck, where you stand on a glass deck. This one gave me a little more pause than the tilting windows, but again, it wasn’t that scary. There were great views of the skyline to be had from up here. 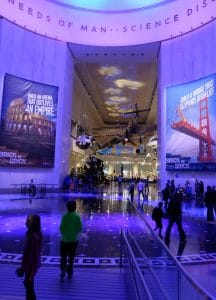 Museum of Science and Industry

I will confess that the first time I went to this museum, I was a single young adult, and I was most definitely a little hung over. The first time my husband went to this museum, in high school, the WWII submarine was still outside. This is a really fantastic museum with so much to see and do. The submarine tour was fascinating, and all the other exhibits were great as well. 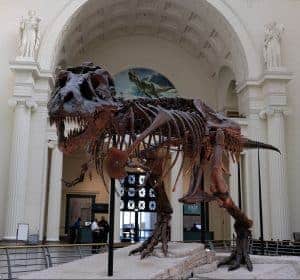 Maybe it was because it was Sunday morning and we were still exhausted from our full day on Saturday, but we were not as gung-ho on the Field Museum. It kind of reminded me why we aren’t very museum-y people. Sue was a sight to behold, and as the daughter of jewelers I enjoyed their gem collection. I know it’s a great museum, and I’m glad we went, but we just didn’t have much in gas in our proverbial tanks by that point in the trip.

We didn’t get any good pictures, but both the Museum of Science and Industry and the Willis Tower had vending machines that sold “Mold-A-Rama” plastic injection mold figurines. You put in your money, and the figure was created in front of you, including writing that indicates where the figure was from. Our kids got a bunch of them, and even my husband got a little red robot. Click the link above to learn more about the figures and where you can find them. They were a great, affordable collectable from the trip.

Whew! Luckily we got a lot of downtime on the eight-hour train ride home.

Verdict: It was a really fun little trip. Sometimes I forget that Chicago is a destination for travelers, but this trip was a great reminder of why. The city is beautiful and alive and offers so much to do and see. We hope we get another excuse to see Chicago again sometime, and if we do, we’ll definitely rely on Amtrak and taxis again.

(Oh, and P.S., my husband won the award for best Chicago souvenir…a Save Ferris t-shirt.) 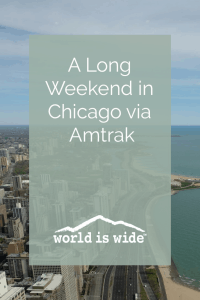 If you found this post helpful, try World is Wide’s destinations from our family’s travel bucket list: 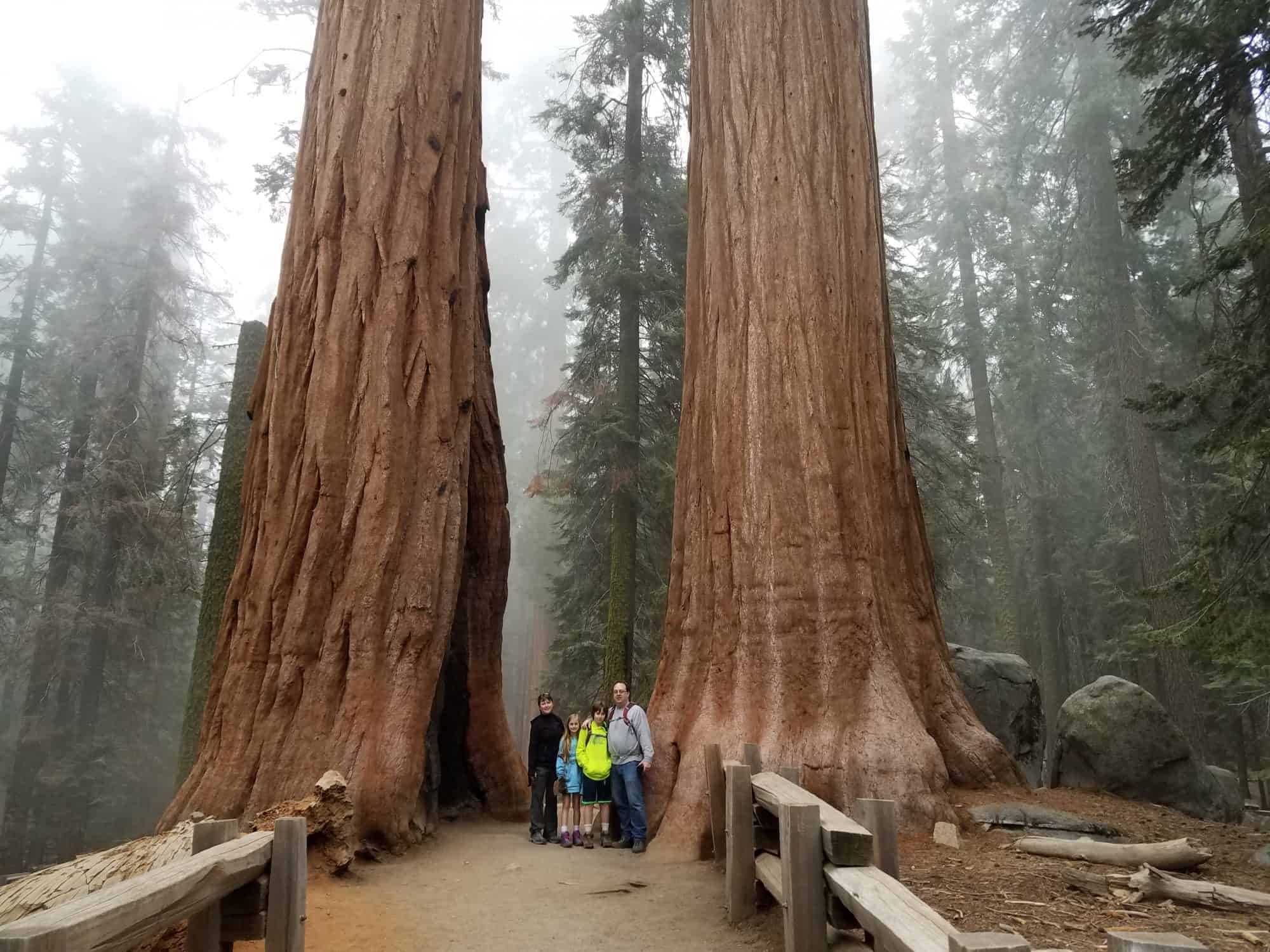 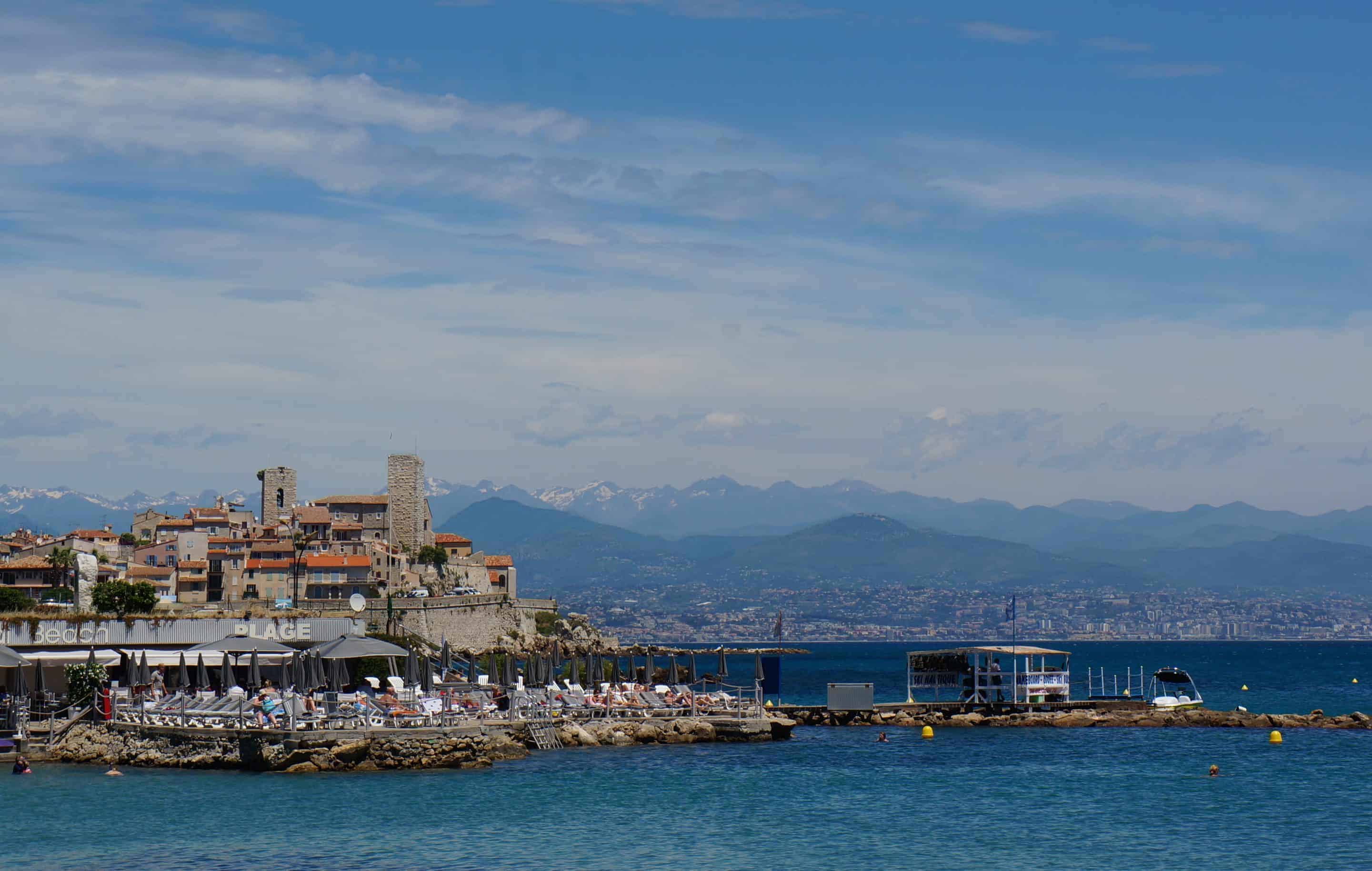 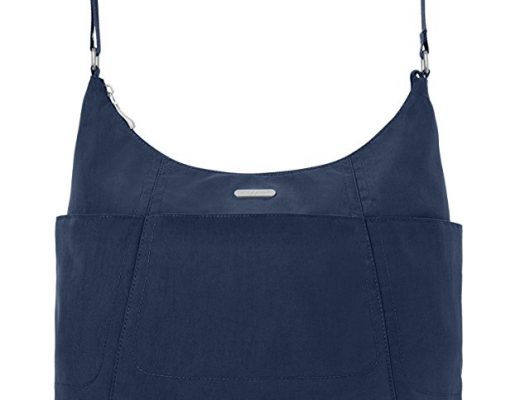 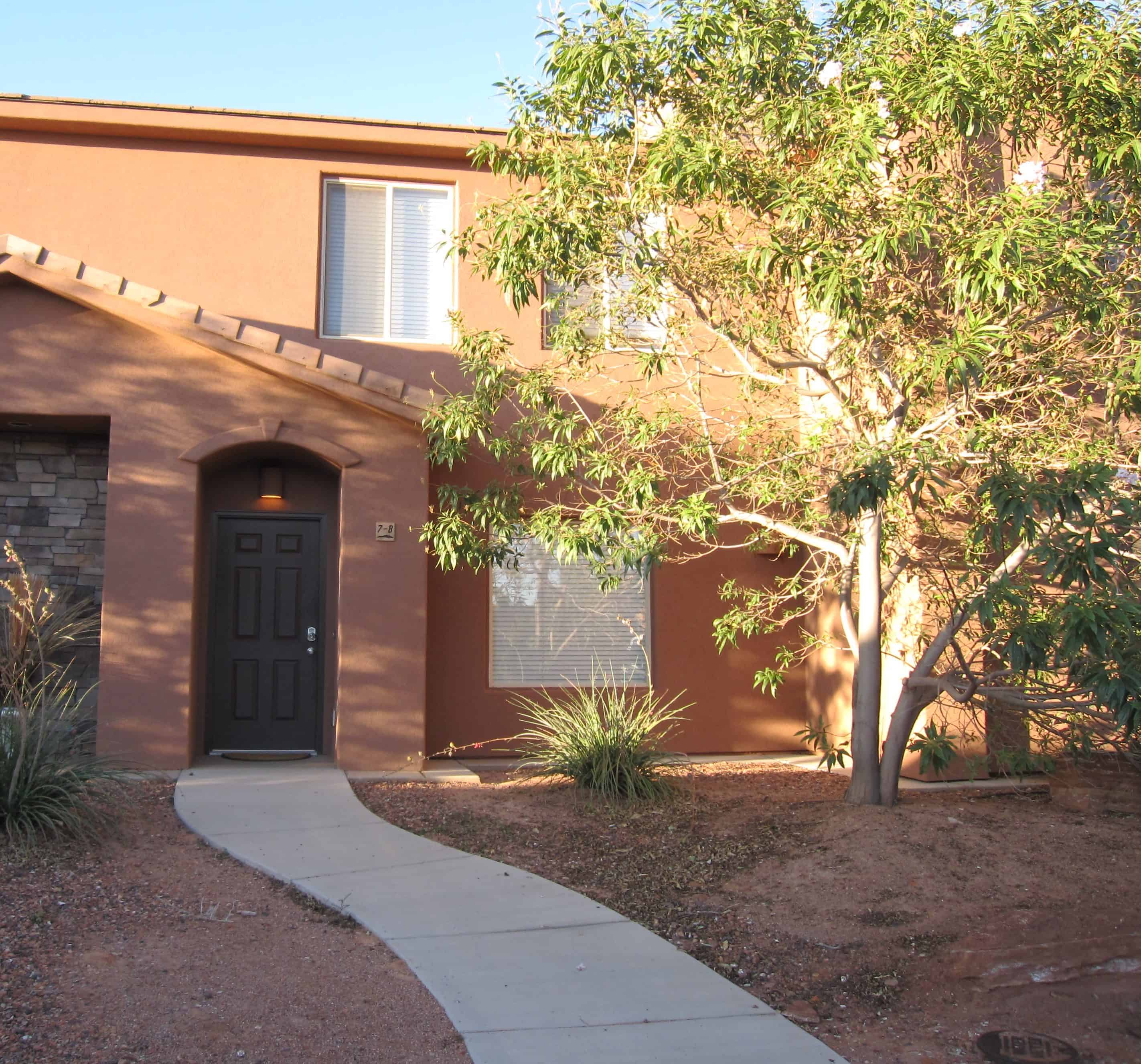 Why You Should Love Vacation Rentals 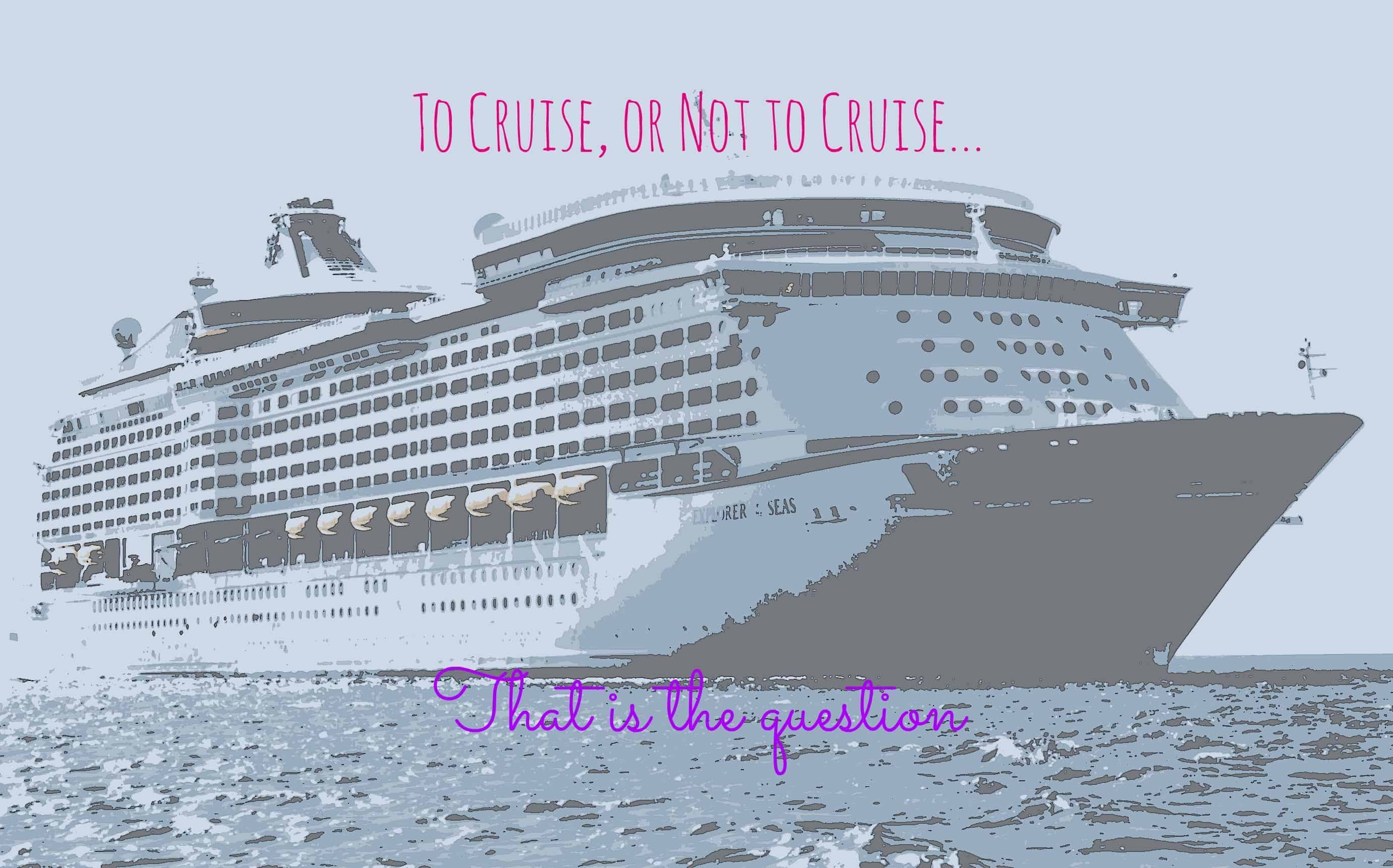 To Cruise, or Not To Cruise...