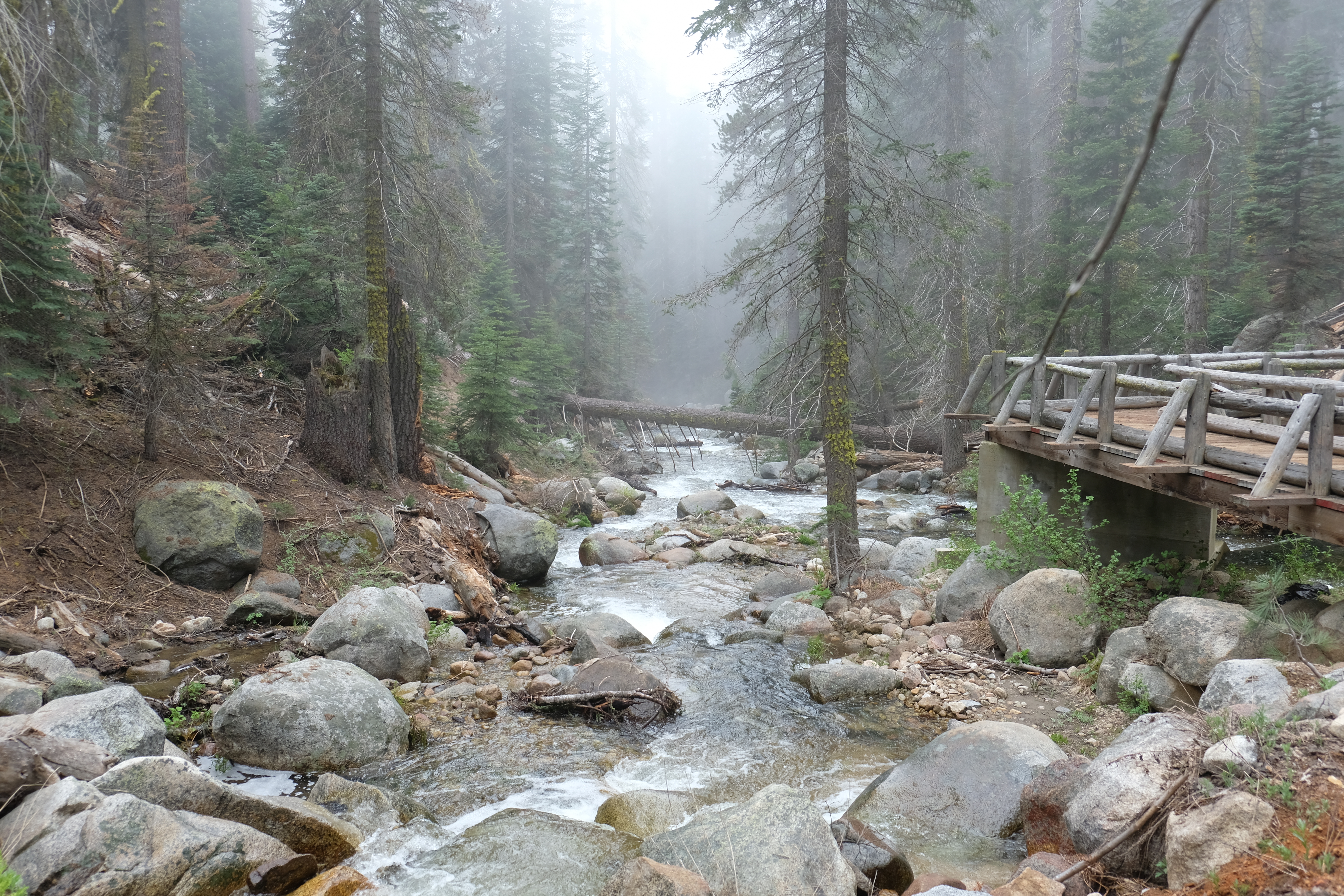 In June 2017 our family took a 9 night trip to California. One of our family’s travel bucket list goals is to see all 50 states, so this was a good opportunity to hit the Golden State.

Our goals for the trip were:

The originally planned itinerary was as follows:

We love mountains, hiking, and sweeping vistas. This trip had it all (though we couldn’t always see it…more on that later). We were excited to get rolling!

What can I say about San Francisco that hasn’t been said by millions of other people? It’s a beautiful city on a beautiful stretch of California coastline. The culture is cool, and the tourism is in full force along the wharf. San Francisco was my and my husband’s first travel destinations as a couple, so it’s special for us. We spent time at Musee Mechanique. Our 13 and 10 year olds (and their father) really enjoyed playing all the old-time arcade games. We gazed at the sea lions, and of course, we ate at Ghiradelli.

Our lodging that night was the Holiday Inn San Francisco – Fishermans Wharf. We were purely looking for a functional, clean place with reasonable parking to spend the night in before heading out to Sequoia. It more than fit the bill for our needs.

First thing the next morning we went to Alcatraz on their tour. I’ve been to San Francisco at least three times, but had yet to tour Alcatraz. I’m glad we did. All of us found it totally fascinating. The audio tour did a great job conveying facts and telling the story of life in the prison, as well as walking you through the escape that happened. We all loved it.

Afterwards we drove over the Golden Gate bridge, as one is required to do when in San Francisco, and explored a bit up in the hills up by the Nike Missile Site. We didn’t actually go to the site, but we could see the missiles “launch” from we were. Then we went to look for some hidden treasures, like Jamie Heineman from Mythbusters’ workshop.

We finally arrived at Sequoia National Park around 11 p.m. Let me just say, that’s not the safest drive to make in the dark. We stayed for three nights at the Wuksachi Lodge, so we had two full days to explore Sequoia and King’s Canyon, two adjoined national parks in eastern California. For more about our stay in Sequoia and Kings Canyon, you can check out this post. Below are a few pictures to give you a sense of how amazing these parks are. It did snow on our last morning of our Sequoia visit. Not what Minnesotans want to see in June.

On to Yosemite. We stopped at Yosemite Zipline and Adventure Ranch on the way, which was fun. If you’ve not gone ziplining before, this is a nice first place to try it. It was our third go-around ziplining, so for us it felt a little too overly protective. (Our other two experiences were self-guided, but this business sends guides along to hook and unhook you.)

The closer we got to the Yosemite View Lodge, our destination for the next four nights, the more we saw those large ominous highway signs on the side of the road saying that the gate to Yosemite ahead was closed. When we got to the hotel, which is five miles outside of the Highway 140 entrance to the park, we found out that there had been a rock slide near the gate, and that the gate was now closed for at least 24 hours.

The good news is that entrance is not the only entrance to the park. The bad news is that it ended up being a three-hour drive one-way to the gate to the south. What was originally an ideal lodging situation (for someone who didn’t make reservations at a Yosemite Park lodge a year in advance) was now kind of a pain. But the lodge had this going for it…this was the view outside our hotel room. If you’re interested in the Yosemite View Lodge, absolutely spend the extra money for the riverside view. (This is not advice I usually dispense, as hotels are for sleeping in my world.) We loved having the door open to listen to the rushing river.

When we first planned four nights in Yosemite, our plan had also included renting a Jeep and visiting some 4-wheel-drive trails just east of Yosemite. However, the Tioga Road, which goes all the way through the park, was still closed due to snow. (Recall the mention of record snowfall in the winter prior?) I don’t believe it opened until July that year.

So Plan B was going to be spending three leisurely days poking around the parts of the park we could still access. However, now that we were looking at six hours of round trip driving from our hotel to the gate, we were officially on Plan C: a one-day power tour starting at the crack of dawn in order to get a parking spot and seeing as much of Yosemite as we could without being driven to madness by the rest of humanity who showed up to do the same thing.

Our day in Yosemite

The good news is, Yosemite is easily one of the most beautiful places I’ve ever been. I think I would only rank New Zealand above it, in terms of places I’ve had the chance to go so far. We did the Mist Trail, which is a must do. You will end up soaked and, if you’re not in Buns of Steel condition, you’ll be pretty exhausted by the time you get to the top, but it’s fantastic. Here is a view from the top…

After hiking some more, we took some down time at a visitor center before heading to Glacier Point. More spectacular views awaited us there. Several photographers had their place staked out to take sunset photos, and I totally get why.

After two nights at Yosemite View Lodge we slept in, did laundry, and packed up to head to the coast.

We dared Mother Nature to hit us with her best shot in Santa Cruz, and she responded…with temps in the 70s and sunshine. It was beautiful! We picked up beach stuff at a Walmart in central California, so we were ready to go. We got a hotel room at the Comfort Inn Beach/Boardwalk Area for two nights. Honestly, other than location this hotel didn’t have a lot going for it. Rooms were very small, and parking was really tight. It had the tiniest outdoor pool I’ve ever seen. Not sure why they even bothered, when the beach was right down the street.

Most of our full day in Santa Cruz was spent on the beach. It was the end of the trip, so we were fine having no plan. We wandered along the coast from the boardwalk and wharf to the surfing museum. The lull of the waves finally became too much for the kids to ignore, so they dove in on the walk back. What you can’t see is that this is at a beach that was full of dogs. Not sure if it was an official dog beach, but there were dozens of them there. 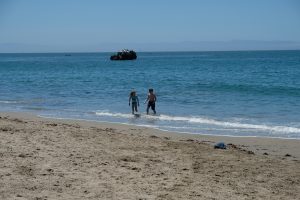 Eventually we found our way back to the  beach by the boardwalk for some more beach time. That’s where 3/4 of us got our sunburns despite using generous amounts of sunscreen.

The trip was a success overall. We saw breathtaking scenery and eventually got good weather. We have funny stories to tell from our experiences. And we were together, which was most important. I think having fall-back plans in your hip pocket is probably a good idea on any trip, and we ended up really needing it on this one. And it made me hungry to see more of California with my kids. I’d love to come back to this area again sometime, especially since I feel a little cheated by our short time in Yosemite. But if we get back to Yosemite, it will not be during the summer.

Travel is about creating memories with those you love. And this trip had memories in spades. 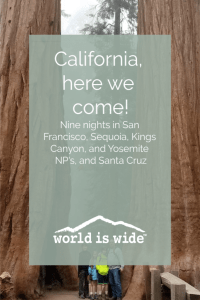 If you found this post helpful, check out other World Is Wide’s posts from our family’s travel bucket list:

A Long Weekend in Chicago via Amtrak 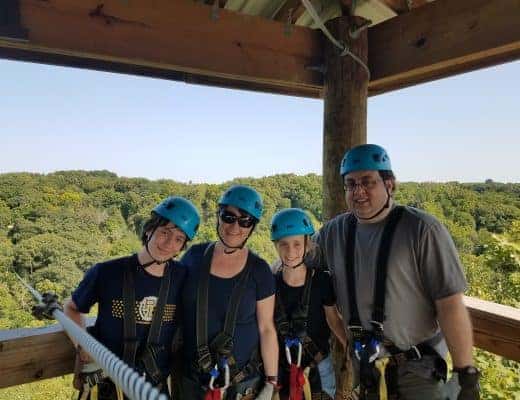 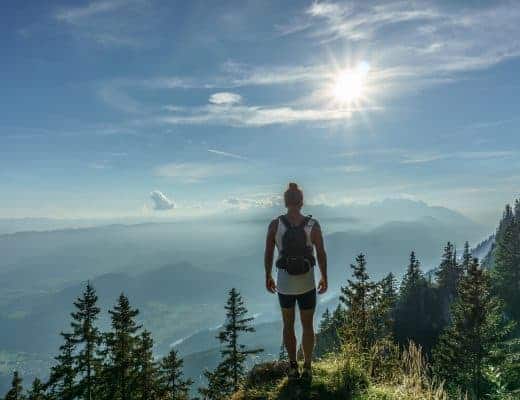 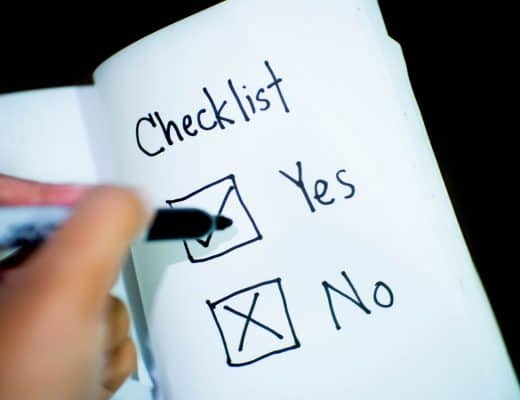 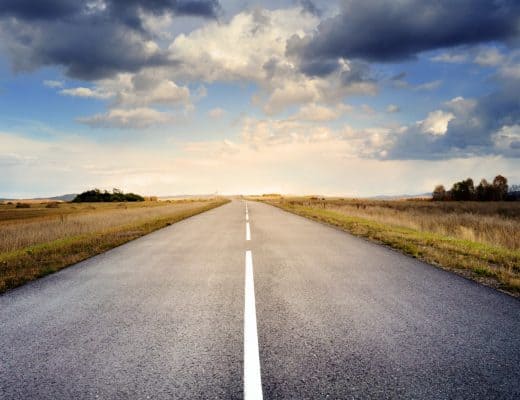